Explain like I’m 5
Your body is a bad colourist and decided to add extra ink to that particular spot of your skin.

Complications
They are no big deal for the most part, but many people like to have them removed.

Note: Have your mole checked out it: 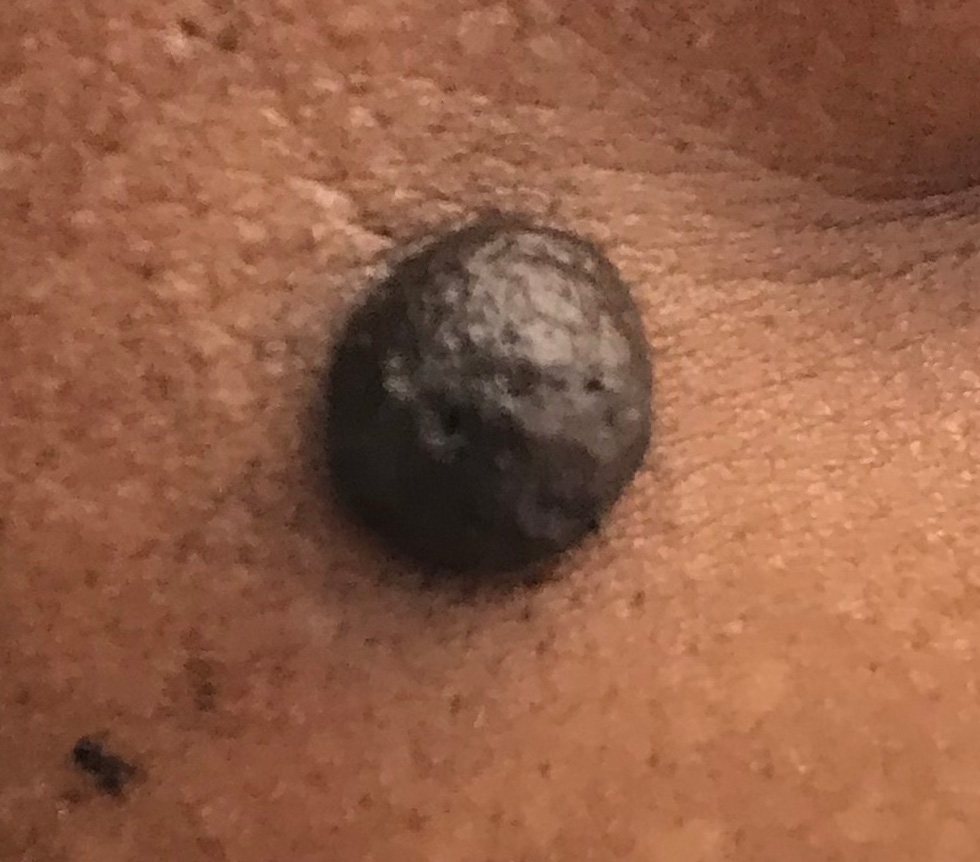 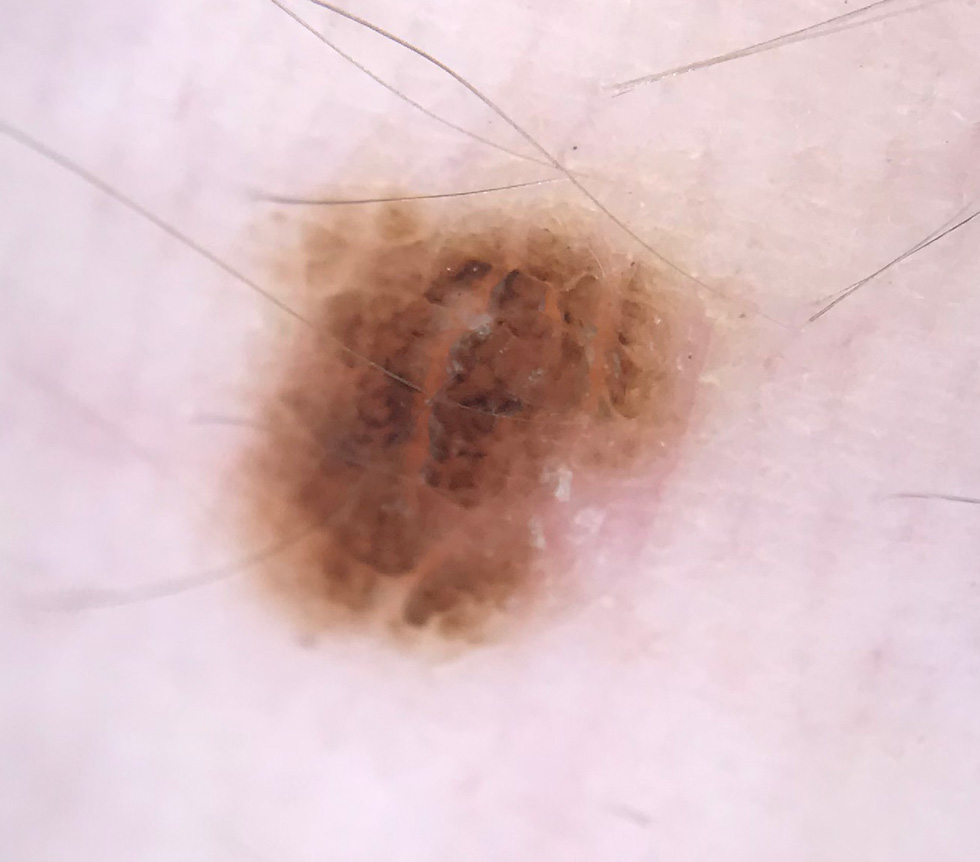 Explain like I’m 5
That part of your body is a little disorganized and a few of your blood vessels, veins, and arteries got tangled up.

Complications
Vascular lesions are wild cards and very unpredictable. Their connection to the body’s circulatory system can lead to more serious problems, but typically they are just benign tumours. 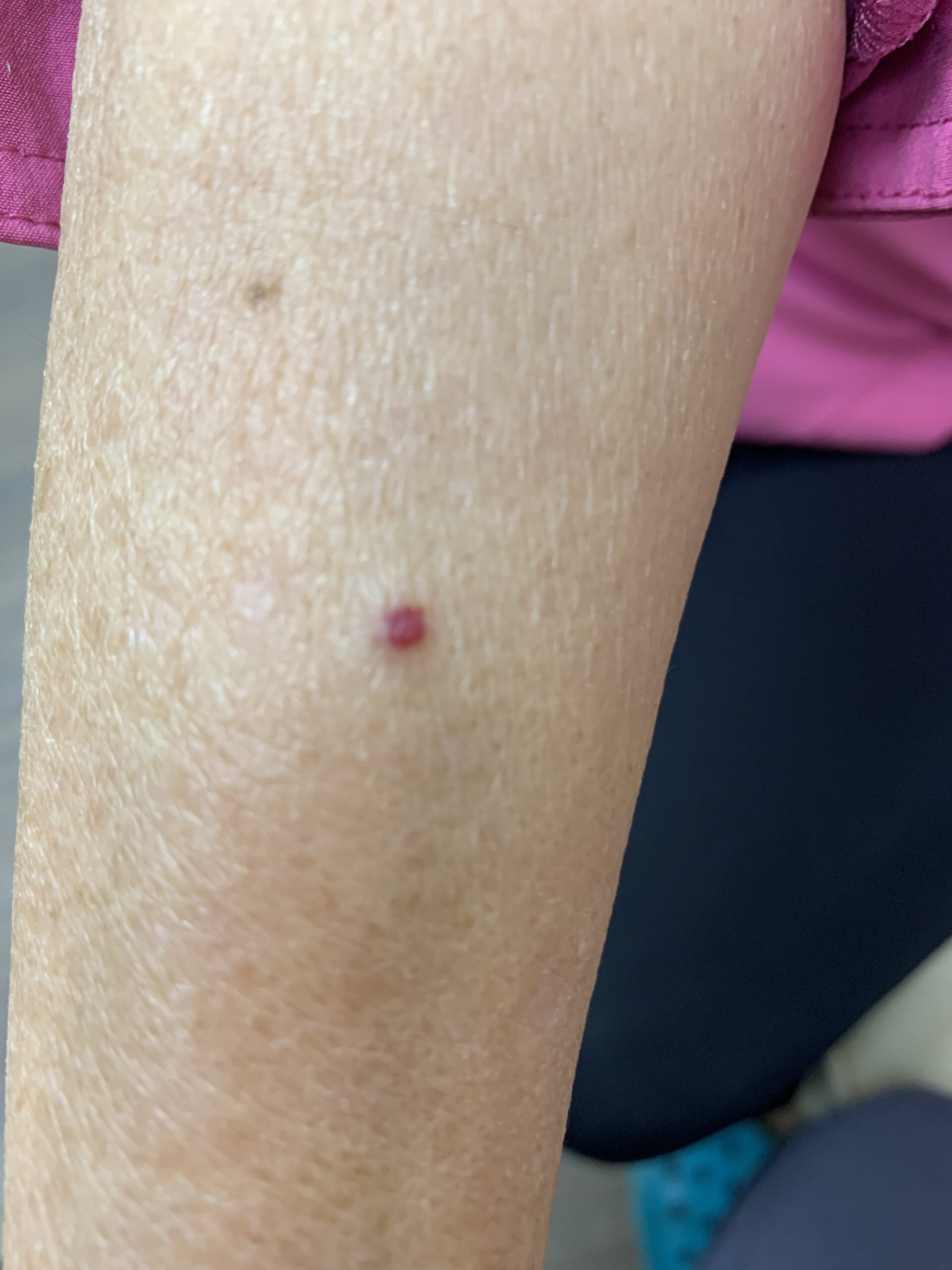 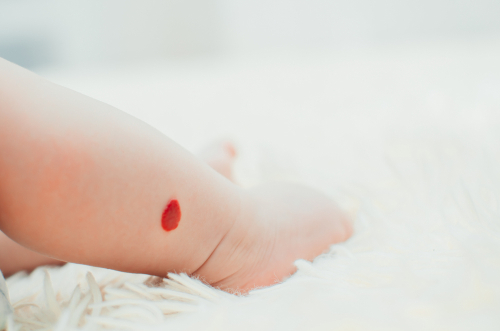 Explain like I’m 5
They are like little pebbles under your skin, but instead of being made from rocks, they are made from extra skin cells.

Complications
Much like a mole, these are typically harmless and are usually caused by bug bites, or something just as inconsequential. 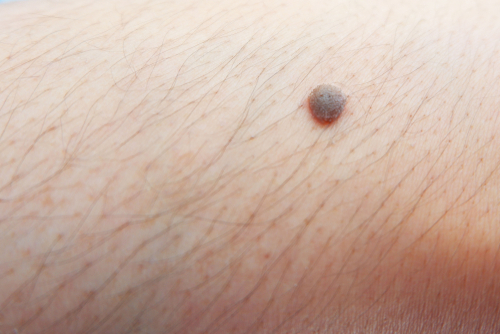 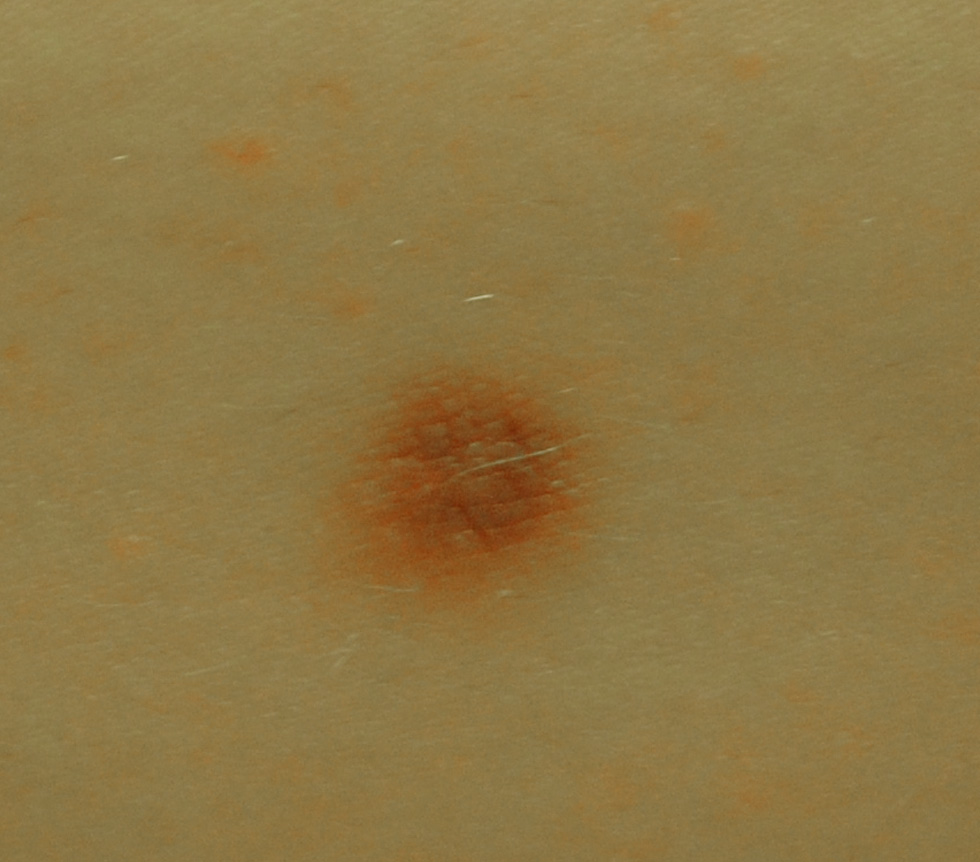 Explain like I’m 5
They are waxy or wartlike growths that develop with age. Often described to have a “stuck-on” appearance.

Complications
Much like a mole, these are typically harmless and are usually caused by sun exposure or consequence of aging. It is usually inconsequential. However, much like anything else on your body, they can grow or lead to bleeding when irritated. 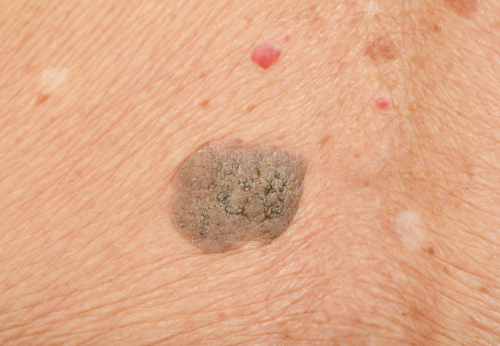 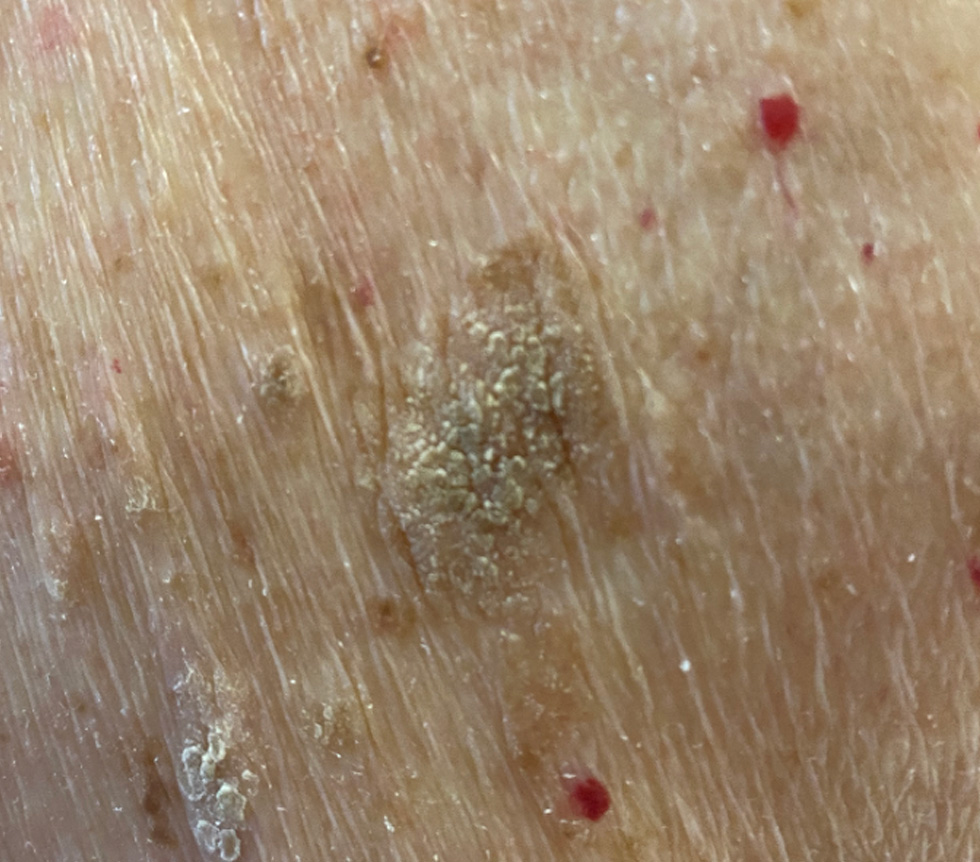 Explain like I’m 5
These are rough, scaly and crusty patches on your skin caused by continued and extensive exposure to the sun. They can itch and burn, and sometimes be varied in colour. People with light skin and those over 40 are most likely to be get actinic keratosis.

Complications
Actinic keratosis may be pre-cancerous and can only be diagnosed by a doctor through a biopsy and other tests. They can grow to be quite large and even bleed. However, the most common complications are disfigurement, especially since actinic keratosis is typically found on your face, scalp, neck, and hands.

If left alone, sometimes the body can resolve them on its own. but some can develop into full blown skin cancers. 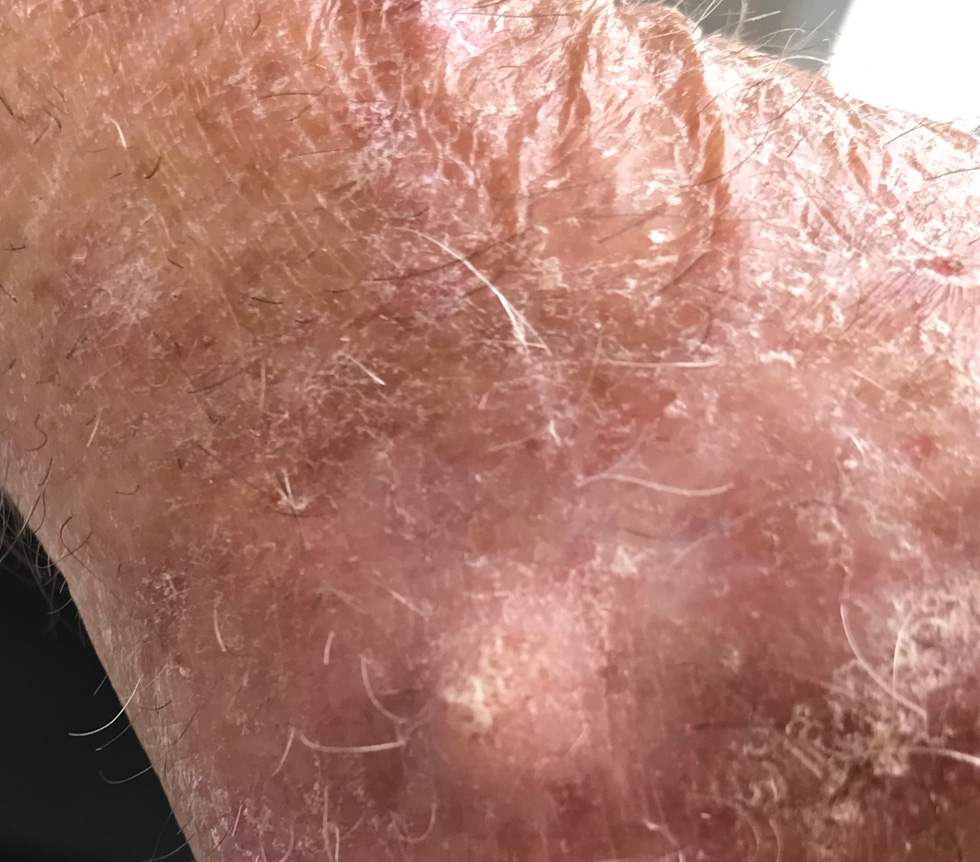 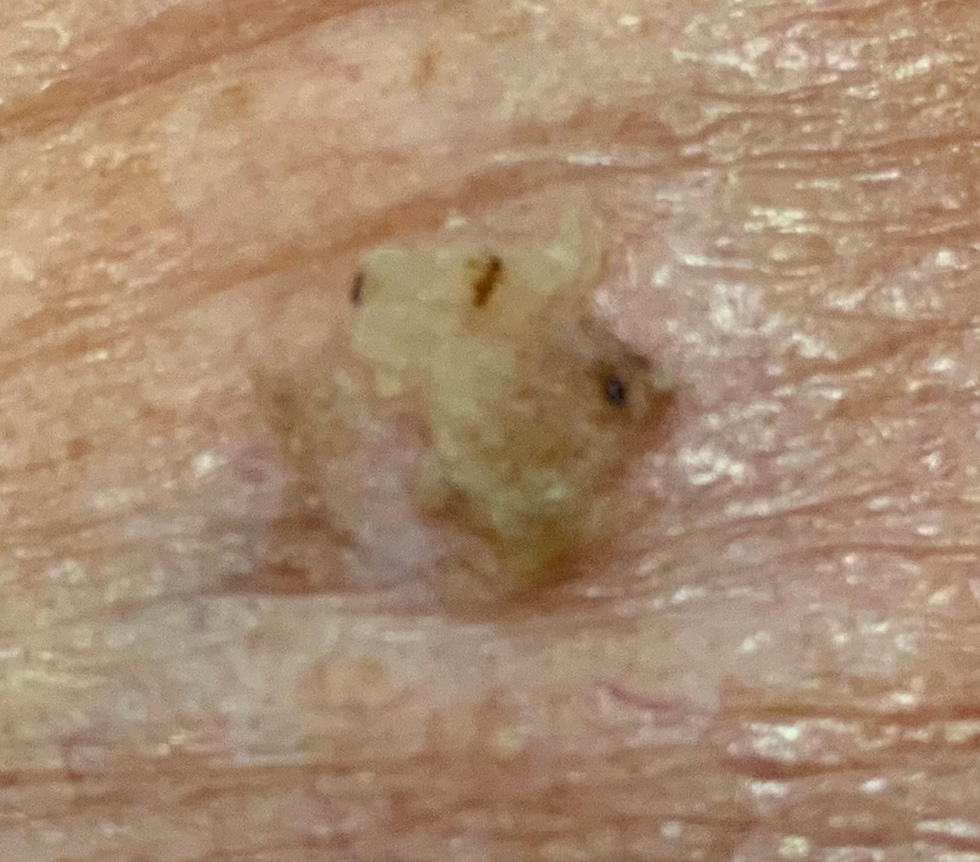 Explain like I’m 5
Your skin has a type of cell called “squamous cells” and are found in the middle and outer layers of the skin. That is what is being scrubbed off when people exfoliate their skin.

Squamous cell carcinoma is what develops when that process goes into overdrive and stockpiles new skin cells. This accumulation of skin cells is what leads to a cancerous tumour and are usually hard red nodules or flat sores with a crust.

Complications
Rarely does squamous cell carcinoma spread to other organs or lymph nodes, but that it can happen, especially if it is found on your lips or other mucous membranes. The most common complication is disfigurement, pain, bleeding, infections, and scaring. 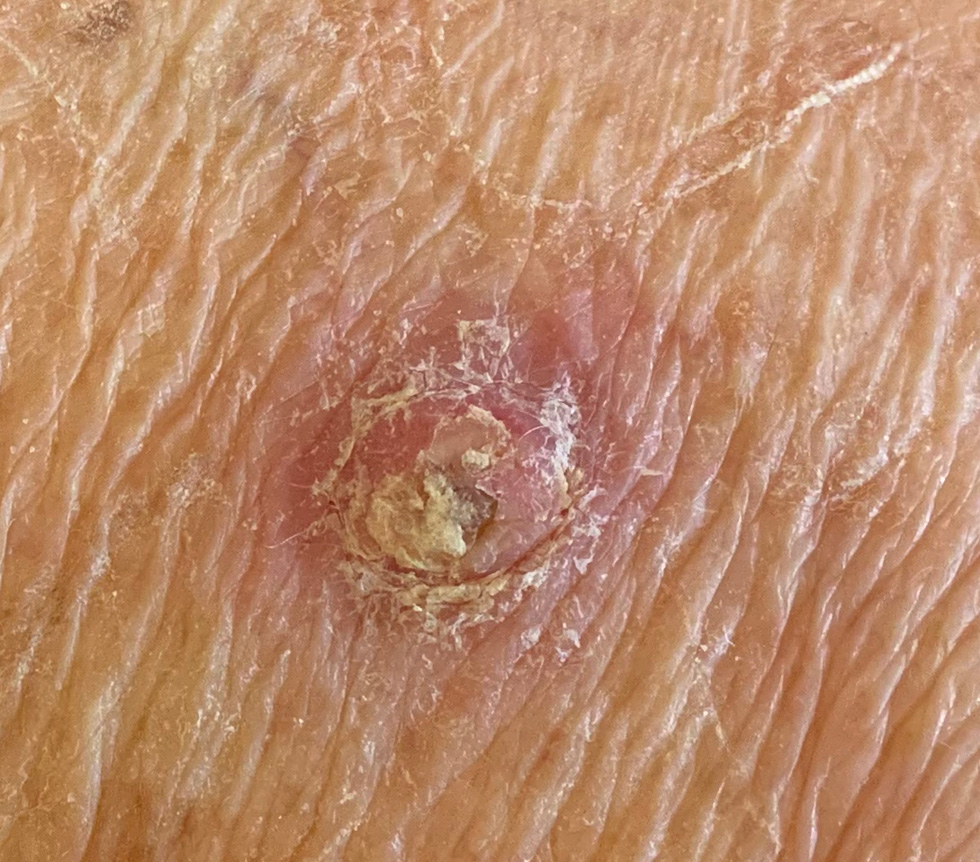 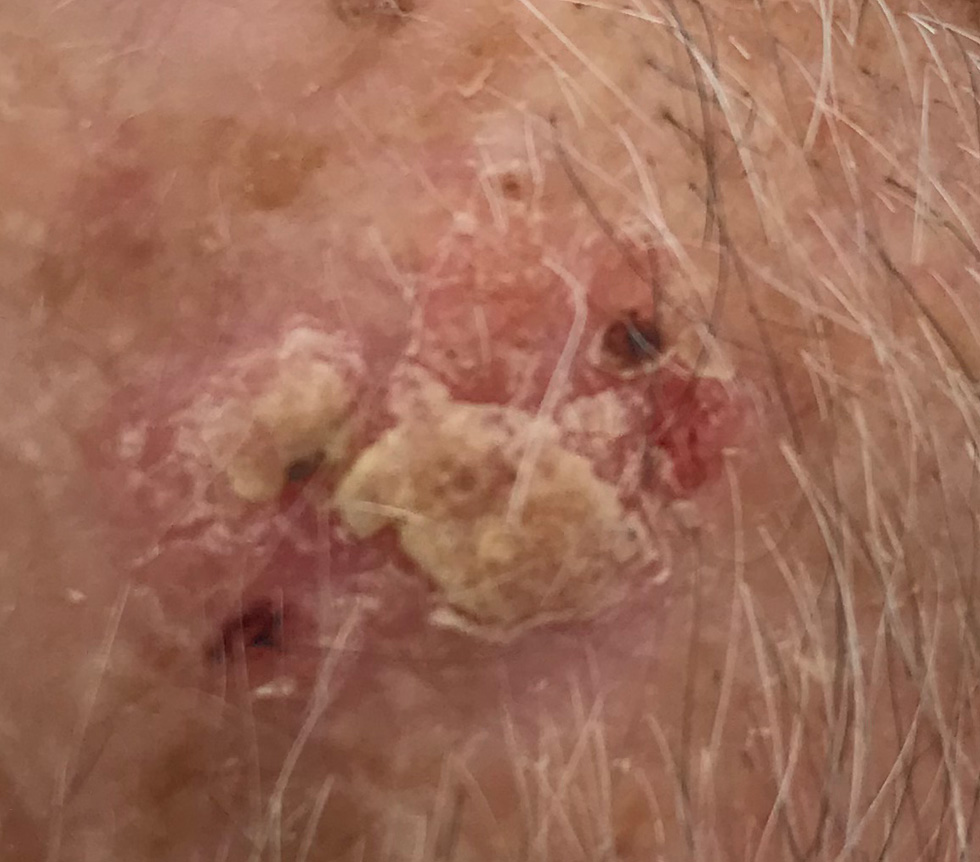 Explain like I’m 5
Your skin has a type of cell called “basal cells” and are found on the bottom layer of your skin. Basal cells are responsible for creating new skin cells and replace the old and dying squamous cells on the surface.

When people “exfoliate,” or scrub off that top layer of their skin, it removes the top dead layers or your skin and promotes cell turnover from these deep basal layers. This exposes younger layer of the skin giving people a healthier and younger appearance.

Basal cell carcinoma is what develops when the cell division process in this deep basal layer goes into overdrive and stockpiles new skin cells. This accumulation of skin cells is what leads to a cancerous tumour.

Basal cell carcinoma can present in many different colours but typically appears raised like a pearly papule. Sometimes they can “burst” creating a small ulcer like crater at the center of the tumour that can lead to bleeding and scaring.

However, recurrence is the biggest concern since untreated cancers can continue to grow in size making it difficult to completely remove. 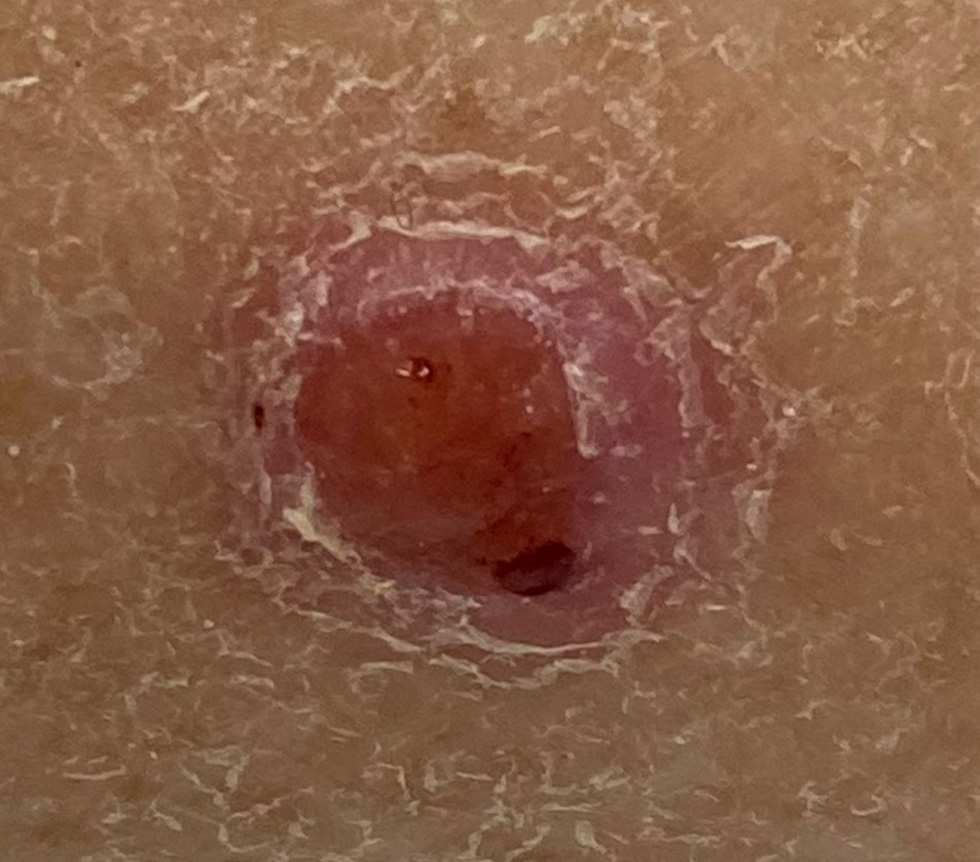 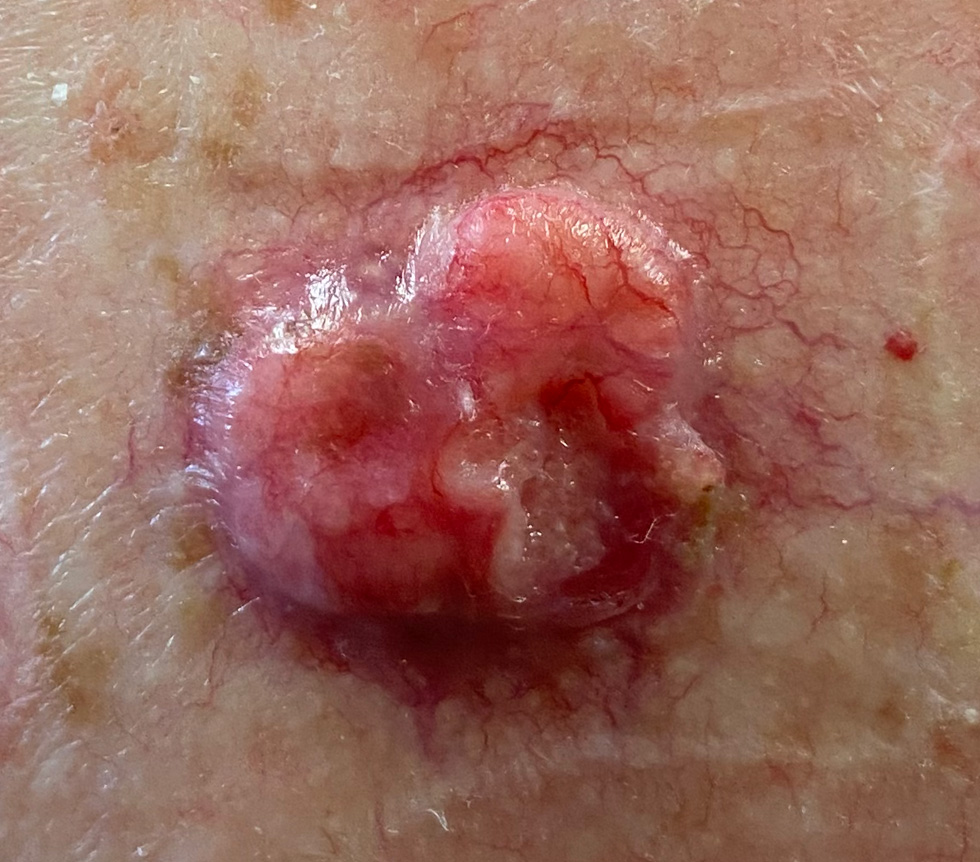 Explain like I’m 5
Your skin has something called “melanin” – it is what gives skin its colour. Some people have a lot of melanin, others have less melanin.

More importantly, melanin is the body’s naturally occurring “sunblock” since it absorbs harmful sun rays and prevents UV rays from damaging skin cells. When exposed to a lot of sun, our body naturally ramps up production of melanin and that process causes the melanin to produces a darkening of one’s skin. This is what happens when light skinned people “get a tan.”

But melanin production has its limits. And overexposure to the sun can lead to skin cancer as continual damage to melanin producing cells can go haywire. That is why doctors always recommend using sunblock when going outside and why frequent sunburns are thought to accelerate the risk for skin cancer.

A melanoma often looks like a mole that has gone berserk. A rule of thumb to tell the difference between a mole and a melanoma is looking at the ABCDE’s of a pigmented spot in the skin. (see “Nevus”).

Complications
Melanoma is the deadliest form of skin cancer since it has a natural inclination to spread to other organs and lymph nodes. People often confuse them as moles and forget to get them looked over by a specialist until it becomes too late. Melanomas don’t need to grow very large before it they begin to migrate elsewhere. 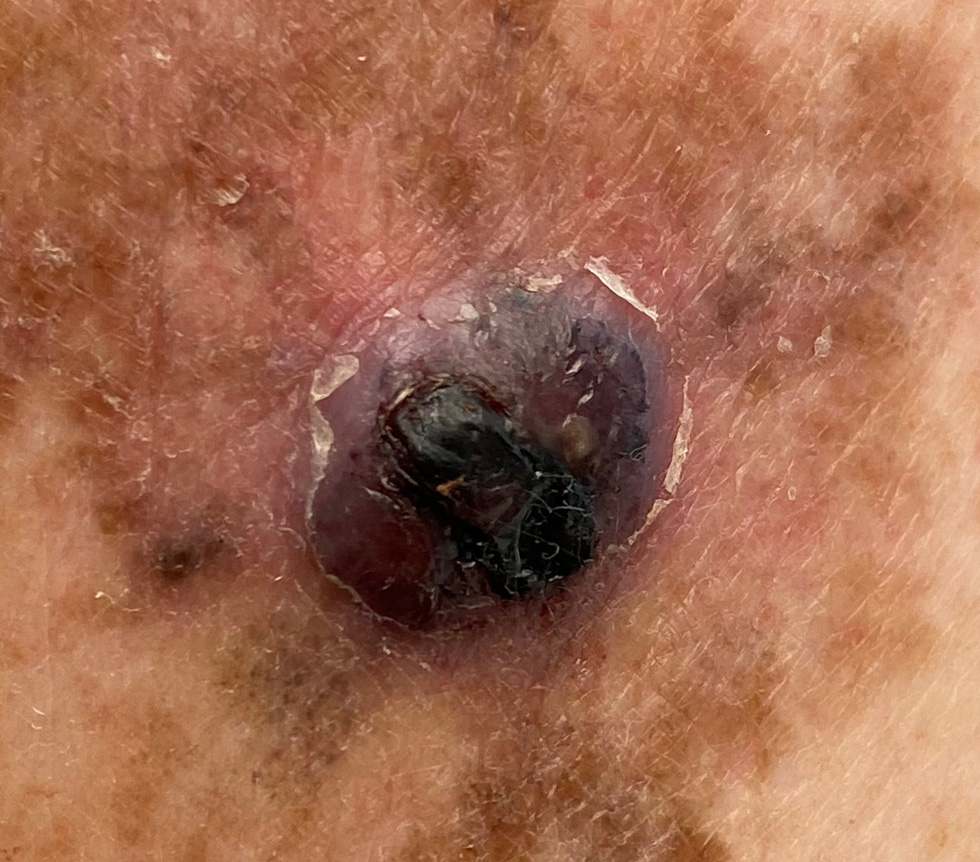 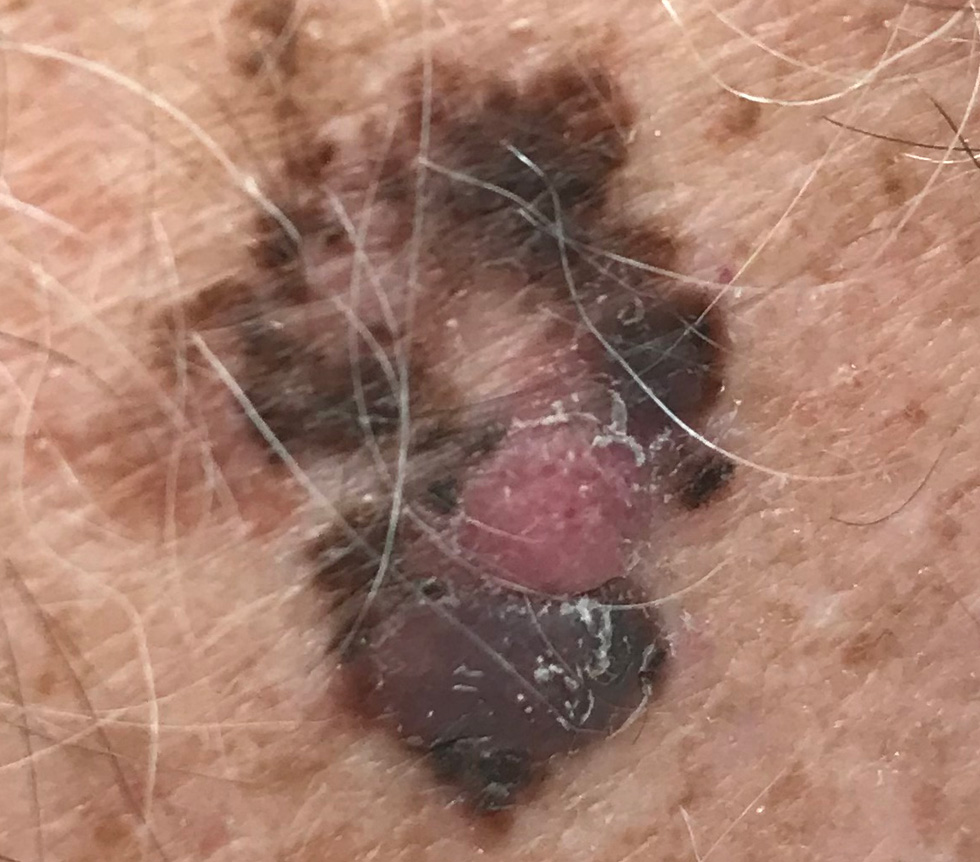 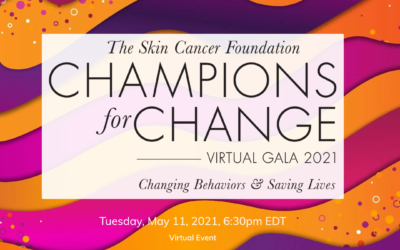 As Melanoma Awareness Month reaches its midway mark, GetSkinHelp (alongside hundreds of participants) gathered online to participate in one of the most highly anticipated events in the skincare community: The annual Skin Cancer Foundation (SCF) “Champions for Change” Gala.

END_OF_DOCUMENT_TOKEN_TO_BE_REPLACED 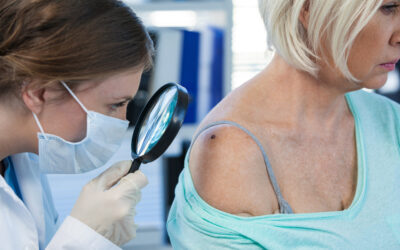 Aging and your Skin

Aging is not easy. Especially for your skin. Below you will find a presentation that can help you learn about what happens to our skin as we age, common skin conditions that can affect your quality of life, and what to look for to ensure skin cancer does not creep up...

END_OF_DOCUMENT_TOKEN_TO_BE_REPLACED 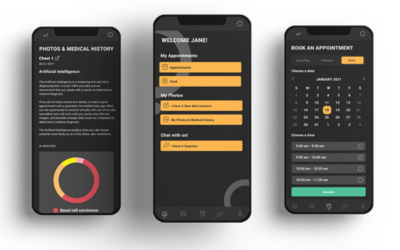 A few months after launching the web platform, Canadians will soon be able to download the new GetSkinHelp App featuring ground-breaking and patent-pending Artificial Intelligence (AI) to screen for a selection of skin diseases.